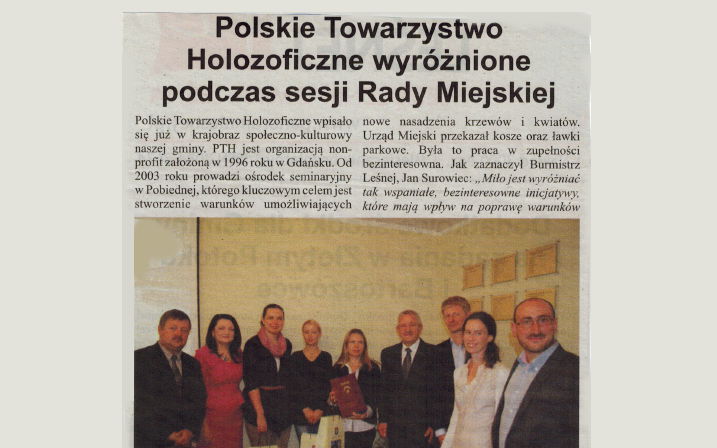 “The Polish Holosophic Society (Polskie Towarzystwo Holozoficzne) has continuously entered into the social and cultural landscape of our municipality. PTH is a non-profit organisation established in 1996 in Gdansk. Since 2003 it has run a seminar center in Pobiedna. Its main objective is to create conditions enabling the implementation of the PTH concepts in life. The PTH is a promoter and organiser of projects supporting the holistic integration of the individual on three different levels: physical, mental and spiritual. Free information and programmes are made available for everybody, no matter what nationality, political orientation, social position, creed, education or profession.

The work for the environment performed by the members of the PTH was given credit to during the City Council meeting, which took place in September this year. Due to the initiative of the PTH and a very good cooperation with the village leader Anna Halas, as well as the participation of the Lesna Town Hall, the aesthetic square near the bus stop of Pobiedna was set up, modernised and developed. A lot of work was put in removing the shrubs and planting new bushes and flowers. The Town Hall provided bins and benches. It was a totally selfless work. The mayor of Lesna town has pointed out: “It is nice to grant an award for such a wonderful, selfless initiative that has an impact on the living conditions of the inhabitants, as well as the aesthetic quality of the village. Many of the inhabitants of our municipality should follow the example of the PTH, which again has demonstrated that in joint cooperation one can achieve a wonderful effect.“ The representatives of the Polish Holosophic Society were given thanks and the commemorative statuette.

The Polish Holosophic Society has already performed a few projects for Pobiedna village, out of which the most important ones are the construction of the magnificent playground for children and the repainting of the school´s facade. As Anna Halas, the village leader of Pobiedna said, “I wish all the village leaders just half of such a group as we have in Pobiedna.“

Thanks were also expressed to two inhabitants of Pobiedna – Arkadiusz Lozinski and Ryszard Sosnowski, who have actively joined in the modernisation of the square.”