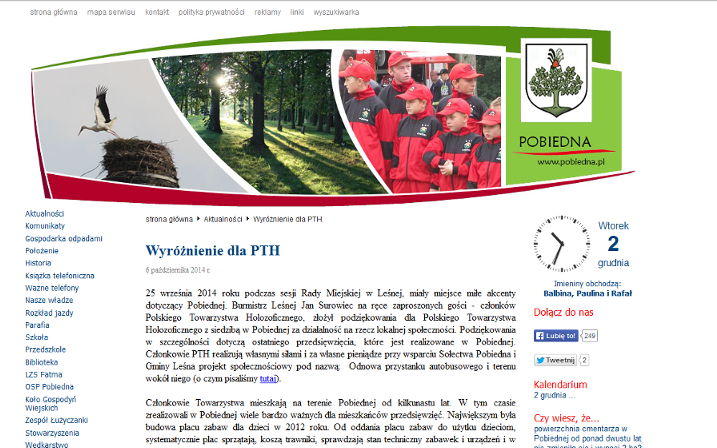 English translation of the article on the Pobiedna website about the Bus station project, September 2014

On the 25th of September 2014 during the meeting of the Municipal Council in Leśna , a positive emphasis was put on the village of Pobiedna. The Mayor of Leśna, Jan Surowiec, thanked Polskie Towarzystwo Holozoficzne with its office in Pobiedna for their activities to the benefit of the local community, which he expressed in the presence of members of the society. The acknowledgement was in particular related to the latest undertaking, which is being realised in Pobiedna. The members of the PTH, with their own efforts, for their own accounts and in cooperation with the Sołectwo Pobiedna and the Gmina Leśna, are realising a community project called “Restoration of the bus stop and remodelling of the surrounding area” (which is described here).

Members of the Society have been living in Pobiedna for more than ten years. During this time they have realised numerous projects that have been important for the residents.

The most significant was the construction of a playground for children in 2012. Since the playground was put into use for the children, members of the PTH have been maintaining it regularly, mowing the lawn, checking the technical condition of the toys and appliances as well as repairing them if needed.

In 2011(Remark:2009) they renovated the facade of Przedszkole Gminne (the Community Kindergarten) and a school gymnasium. Charity events are organised several times per year. They distribute food, household appliances, clothes, shoes, bedclothes, mattresses, toys. During one of these actions, 25 square metres of appliances and clothes were given away.

Every year before winter, they assemble anti-snow nets along the Wola Sokołowska street, with a length of several hundred metres. In 2012 they organised the distribution of firewood. A total of 10 cubic metres of firewood were delivered to the residents of Pobiedna who cannot afford enough fuel.

Before Christmas, they decorate a Christmas tree on Plac Wolności. In cooperation with the school, they organise garden classes conducted in their own gardens, they help to organise numerous other classes and school ceremonies.

From the information above it results that the entire society of Polskie Towarzystwo Holozoficzne (PTH) and Lighthouse Center Polen (LCP) with its office in Pobiedna by all means deserve thanks and honours. The only thing they expect from the residents is to allow them to help and act to the benefit of the local community.

Probably every town would like to have such residents as the PTH and LCP members.