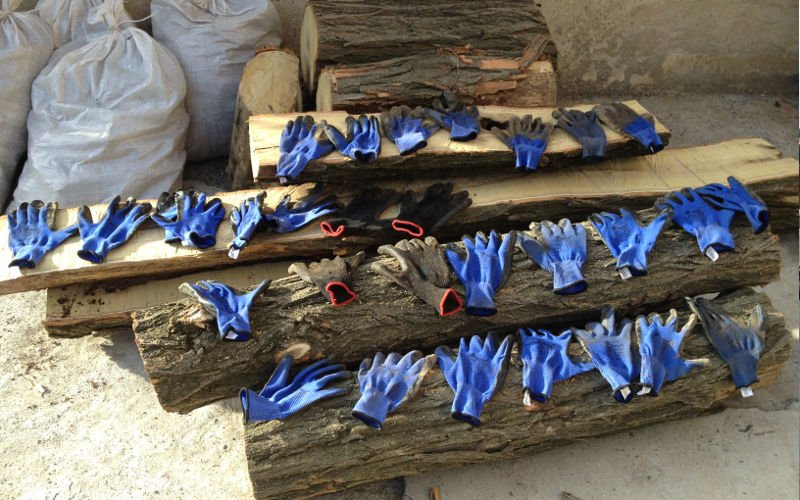 “Living Together” in Knyazhevska Forest Park

“Living together” is a project initiated by the Association for Sustainable Practices called “Our Neighbourhood ASP” with the aim to unite individuals and their community for mutual benefit.. The project is supported by the municipality programme “Green Sofia” 2013 and the Holosphic Society Bulgaria. 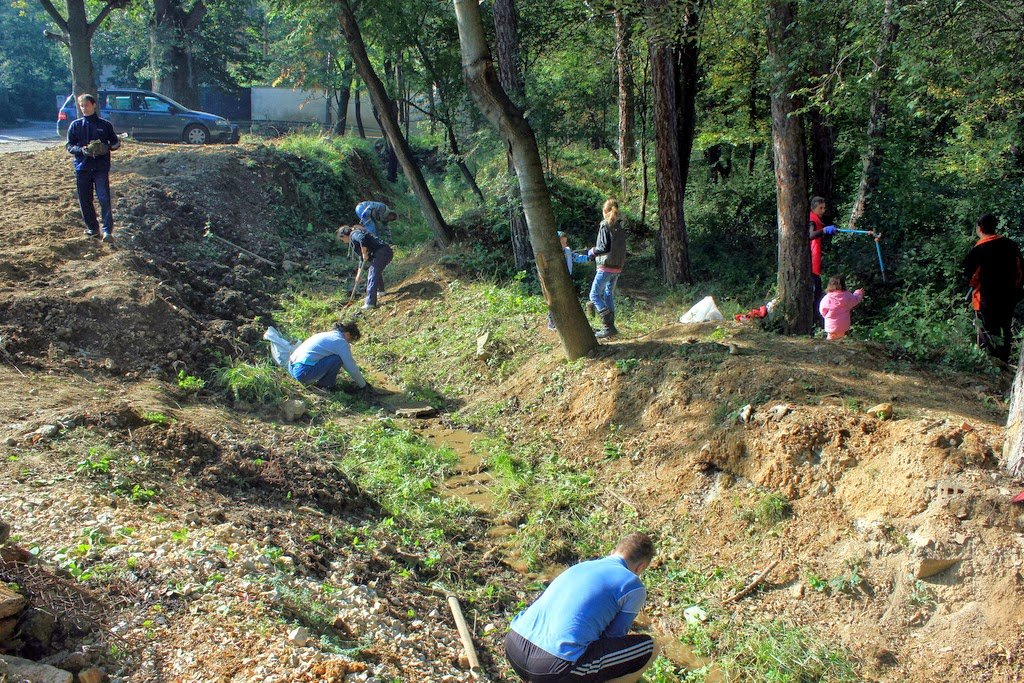 The project kicked off on Sunday, 6 October 2013 in the amazing Knyazhevska forest on the outskirts of the Vitosha mountain in Sofia. The weather was surprisingly warm and sunny, especially in comparison to the cold and cloudy days before.

At 10 o’clock in the morning most of the enthusiastic volunteers had already gathered on site. Everybody put on a pair of gloves, grabbed some pruning shears whereas the more experienced ones went for the chainsaws.

After cutting a dried out tree, its stump was formed into a “throne” for the children’s play corner. The remaining trunk of the tree was cut into smaller pieces to build a natural fence. This fence defines the future repose area for the people in the neighbourhood, which is planned to be equipped with benches and flower islands. 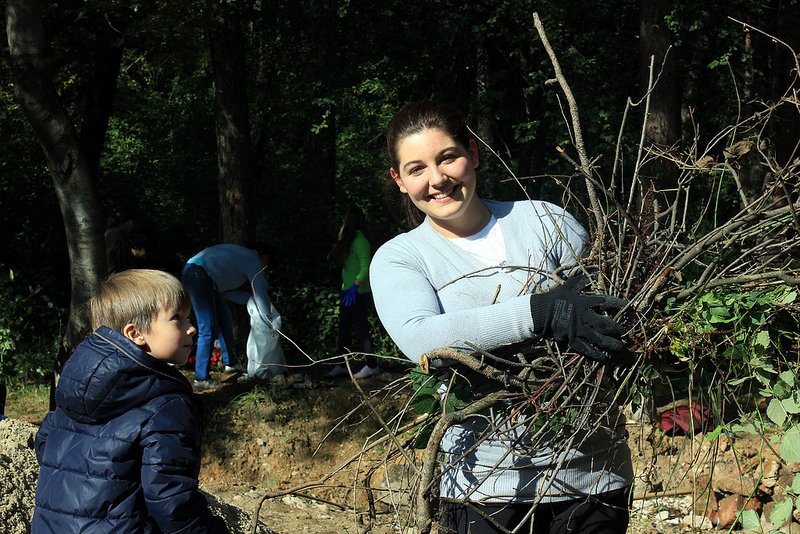 Here we are again. Filled with enthusiasm, commitment and joint physical efforts we gave our best to contribute to the surrounding urban environment and the benefit of the local community.

On the third Sunday, the sun was shining again, giving us all its support to continue. One volunteer had already started the day before, clearing away the wild bushes and preparing the site for the next day’s activities.

The following morning we continued to take away the wild bushes in the forest and slowly the place became passable. The cut off branches and bushes were piled up as a “green mountain“. 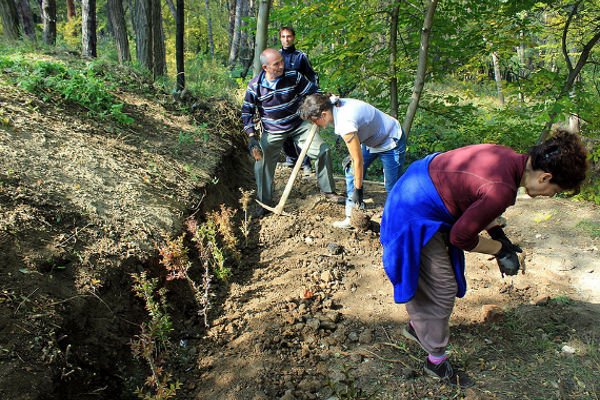 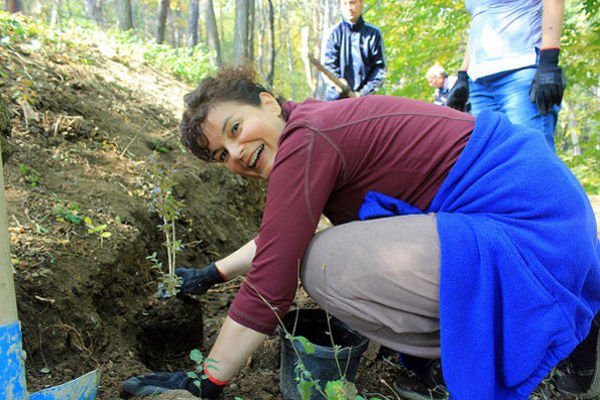 Once again we were positively surprised by the warm and sunny weather conditions, which in fact are rather unusual for this time of the year.

After getting all the necessary tools, we split up in order to work in the three different areas – the compost zone, the children’s corner and the repose area. 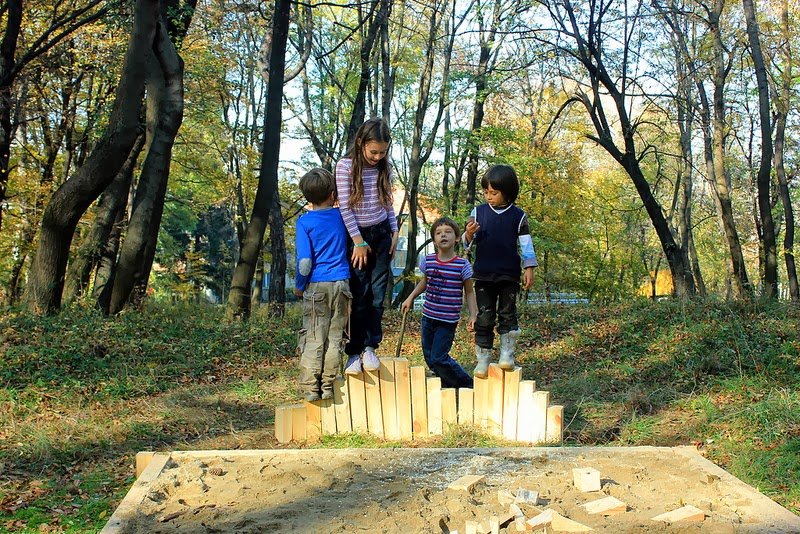 Bucket after bucket and wheelbarrow after wheelbarrow the sand pool in the children’s corner was being filled up.

Small wooden poles are placed next to each other for the children to play on.

In the reast area the volunteers started shaping the planned “river of flowers”. First they set the outlines of the pathway that leads to the place where the bench would later be installed.

From there one will be able to see the blooming beauty of 400 tulips, 200 daffodils, twisted circles of daisies, aconite, flowering shrubs. We were looking forward to the day when everything will be in full blossom! 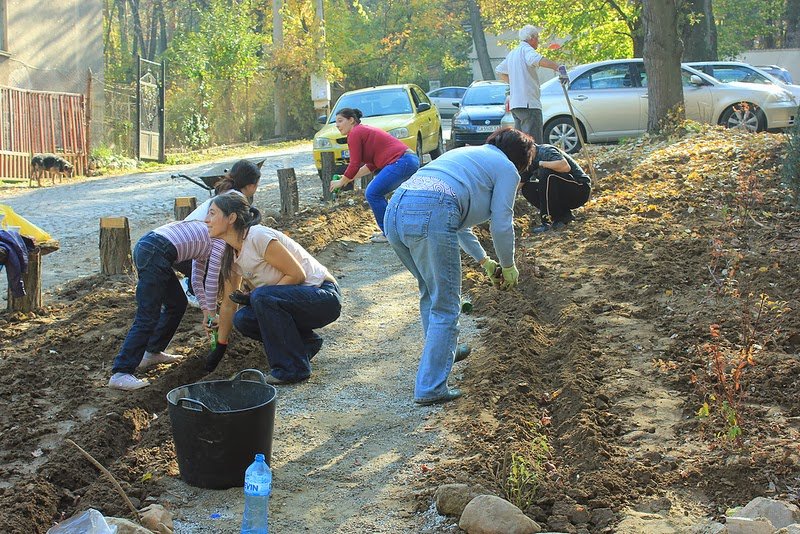 Suddenly a car stopped and a man from the neighbourhood told us that we would need continuous protection by security guards, as people are vandals.

We certainly hope that his words will not become reality. Instead we are confident that people will start giving care and attention towards the place.

On that day we had reached the end of the beginning, the beginning of a new area. The structure of the repose area was laid, the sand pool and first toy in the children ́s play area were put together and the compost zone was ready to be used. 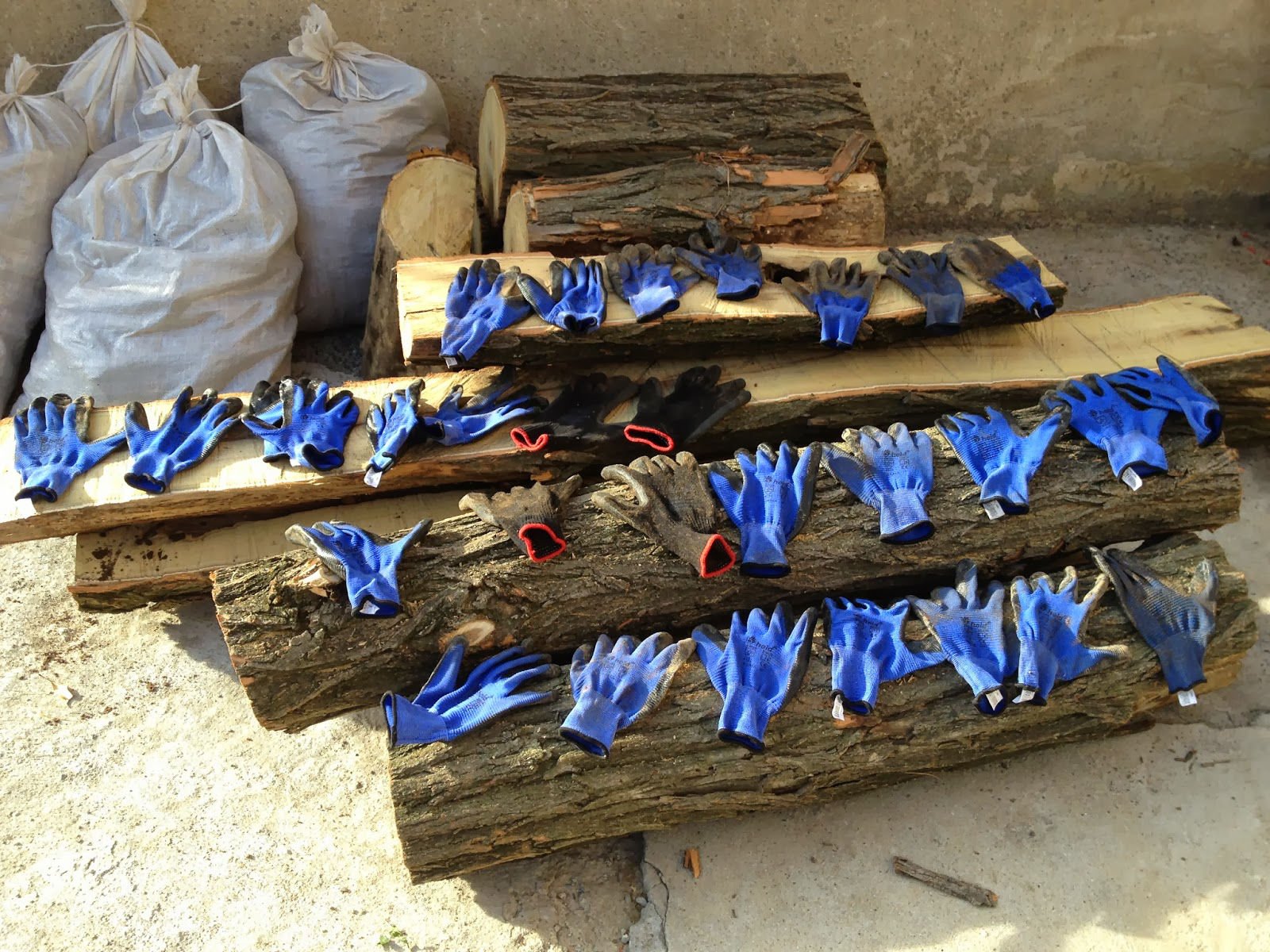 And after all this hard work even the gloves needed to take a rest!

Half a year later, the park presented itself in its full beauty and everybody enjoyed the blooming river of flowers. Read more about the project on the Living Together blog. 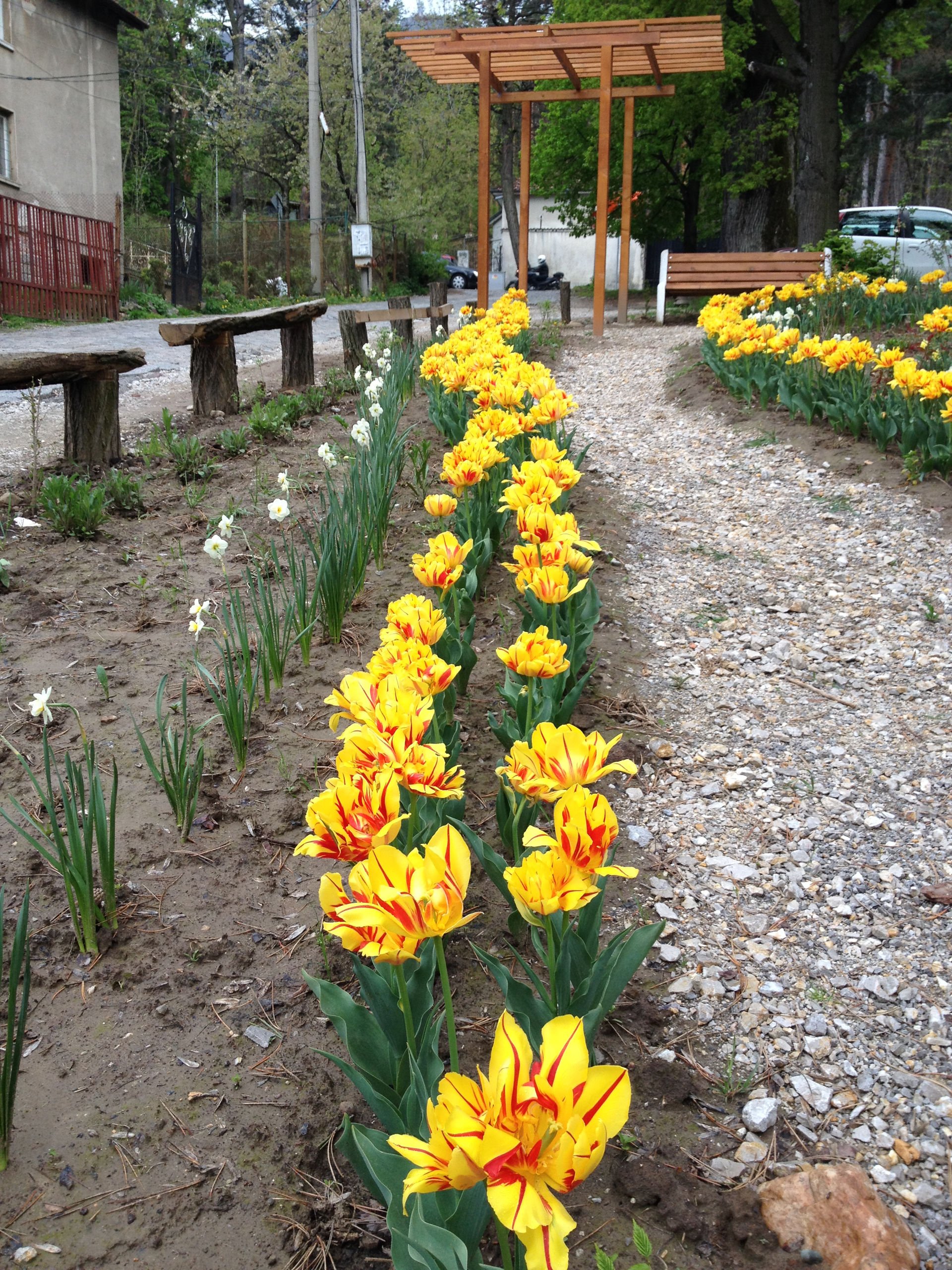 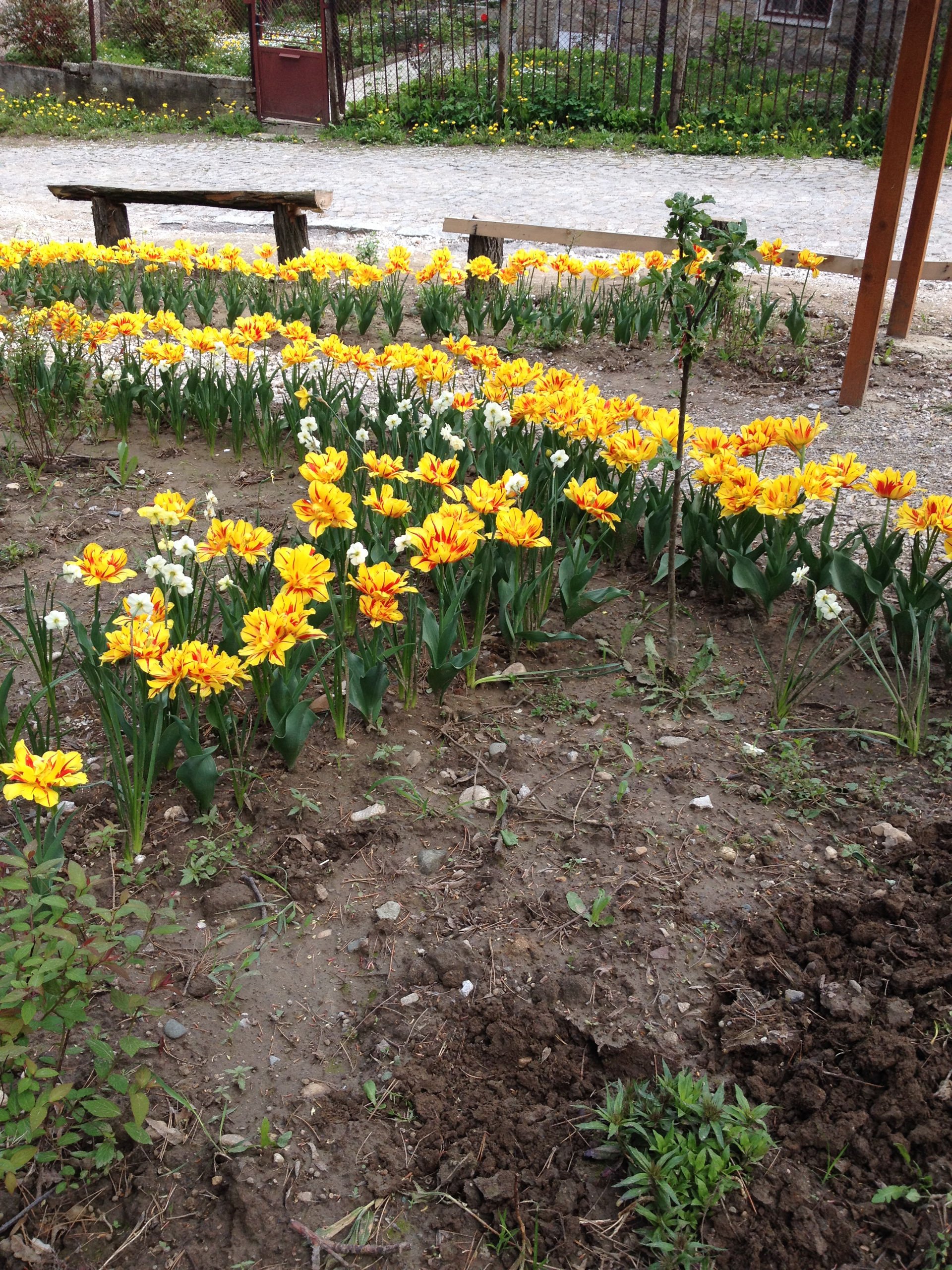